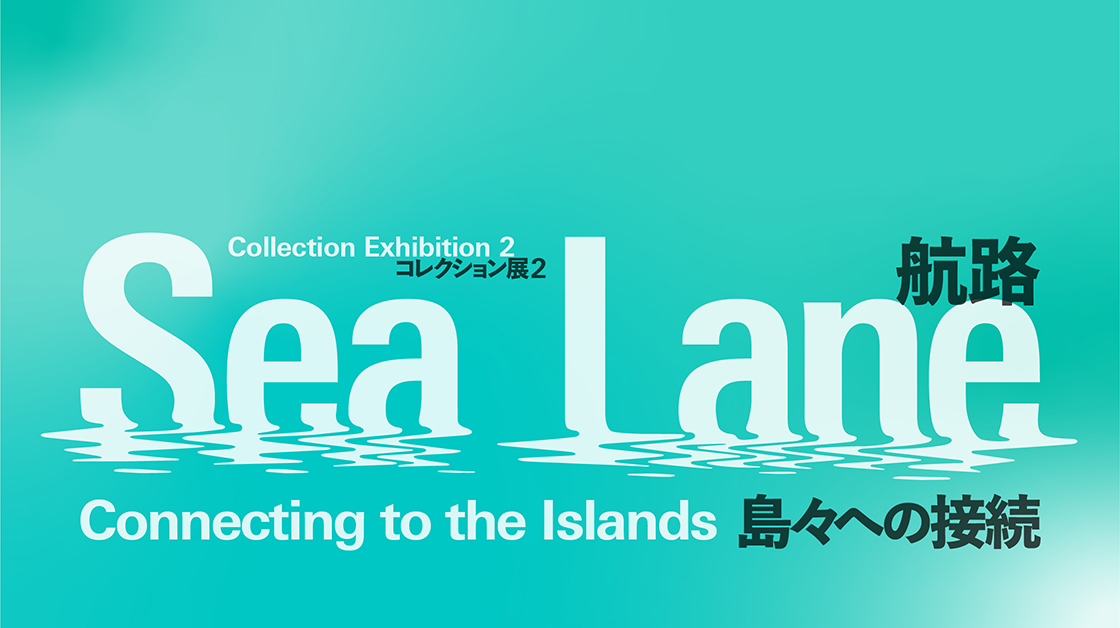 *Fees in parentheses are for groups of 20 people or more and web tickets.
*Online and advanced sales tickets not available; same-day ticket sales at the venue only.

In conjunction with the 50th anniversary of Okinawa’s reversion from the U.S. to Japan, it is with great pleasure that we present Sea Lane - Connecting to the Islands, an exhibition focusing on the characteristically insular nature of the Okinawa region in which we examine contemporary art of the Ryukyu Islands as well as the works of artists from Southeast Asia and Oceania – areas that have historically interacted with Okinawa via the sea. Since ancient times, the sea has been a “wall” that separated one island and the next while also being a “road” between them. At one time, the Ryukyu Kingdom engaged in trade with regions such as present-day Indonesia, Malaysia, and Thailand, making it a waypoint for the flow of civilization and a meeting place for a variety of people and goods. In tracing the marine history of Okinawa and surrounding countries, we find that the islands engaged in abundant exchanges with these regions while on occasion coming up against harsh conditions. The more people moved around, the more apparent the linguistic, ethnic, ancestral, cultural, sexual, and philosophical differences between them became. Under these circumstances, artists took a hard look at the realities they saw and responded accordingly.
In this exhibition, we present works by seven artists from the museum collection and three others who were invited to participate in this project. These contemporary expressions are rooted both in the unique culture of Okinawa, Southeast Asia, and Oceania, and the irrefutable history of the region. Moreover, the works urge us to consider the diversity that has emerged from the islands, the influence of other regions based on the historical context of the sea, and the relationship between the islands, separated as they are by water, and the people who inhabit them.

Keynote Address: “Vanishing Islands”
Charles LIM YI YONG (Artist / Singapore)
This keynote address introduced the complex and little-known history of Singapore, which is both the point of departure and the theme of the artist’s work, and clarified his understanding of the issues involved. 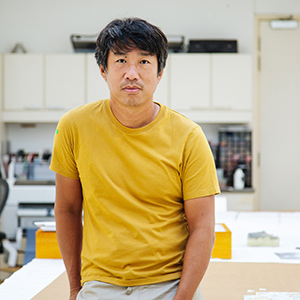 Charles LIM YI YONG was born in 1973 in Singapore, where he lives and works. An athlete who has competed in sailing events including the Olympics, LIM YI YONG has a wealth of knowledge and experience of the sea and marine environment. Based on these, in 2005 he began exhibiting works from the series SEASTATE, an examination of Singapore’s society, political situation, biosphere, and environment from multiple perspectives through the lens of the sea. An ongoing project, SEA STATE has been featured in many international exhibitions, culminating in a comprehensive presentation in the Singapore Pavilion at the 56th Venice Biennale in 2015. 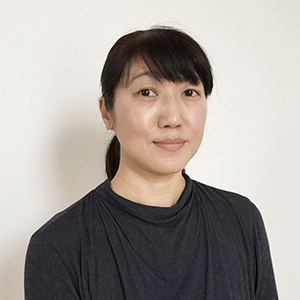 SAKATA Kiyoko was born in Niigata in 1972, and lives and works in Okinawa. She is an Associate Professor in the Faculty of Arts and Crafts at Okinawa Prefectural University of Arts. Sakata has presented installations that question the nature of the everyday, with materials including furniture, daily items, and natural objects, and a unifying theme of “a collective of those whose positions are uncertain.”
Recent major exhibitions include Sugar and Salt, SoolSool Center, Seoul, South Korea (2021); Oscillating Vessels, Hotel Anteroom Naha (Gallery 9.5 Naha), Okinawa (2020); and Present Passing: South by Southeast, Osage Gallery, Hong Kong (2019). 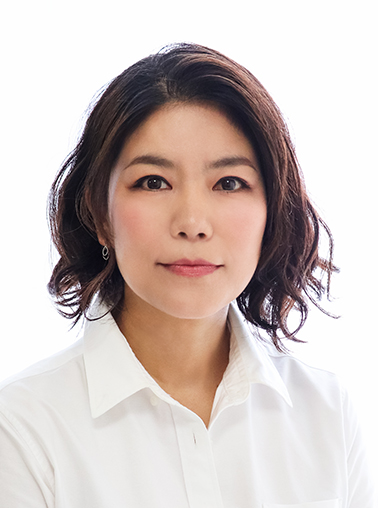 URA Kyoko was born in 1975 in Okinawa, where she lives and works. She is a professor at Okinawa Prefectural University of Arts. While incorporating traditional Okinawan dyeing techniques, she pursues new approaches to the bingata (lit. “red pattern”) stenciled dyeing technique with their own unique perspective and methods, and is working to connect the traditional and the contemporary. Recent major exhibitions include After the Reversion, Sakima Art Museum, Okinawa (2022); The Future Shape of Textiles in Takarazuka 2021, Takarazuka Arts Center, Hyogo (2021), and The Allure of Line: Katazome Stencil Dyeing, Somé Seiryukan, Kyoto (2021). 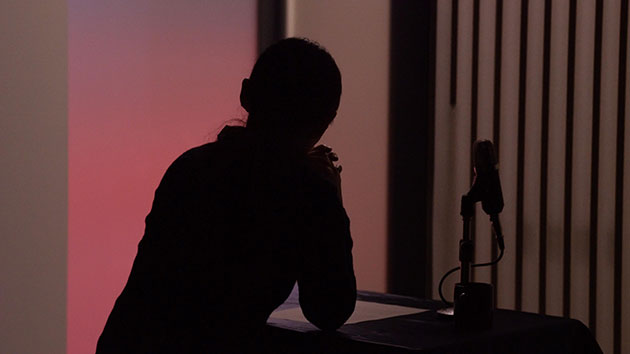 MIYAGI Futoshi, How Many Nights, 2017

While some aspects of culture and history have been preserved because they are separated by the sea, these separations can also result in things becoming distant objects of longing. Based on his personal experiences and memories, MIYAGI Futoshi has been focusing on the themes of Okinawa and sexual minorities, and exploring the possibilities of love between Okinawan men and American men. The works presented here are centered around a romance by a female author, in which women who have experienced separation from their loved ones due to war each document their circumstances and thoughts in their diaries. Drawing on people’s life stories of simultaneously seeking freedom and experiencing adversity while transcending racial and cultural differences, this is a beautiful and lyrical tale in which each nationality and identity intersect and connect to a larger narrative. MIYAGI illuminates “separations” and “relations” that exist in society today, such as those based on nationality, race, language, age, sexuality, and community. 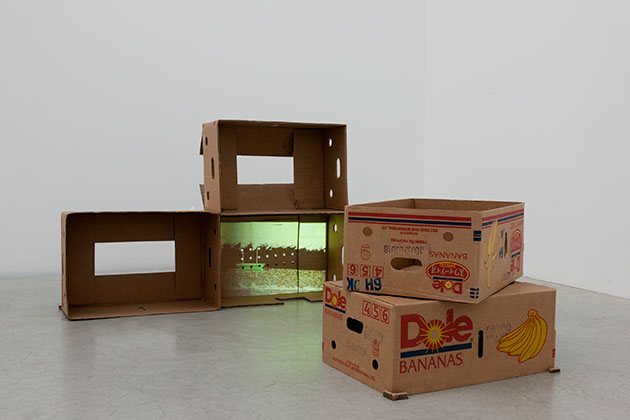 The Quest for Abundance

Okinawa has been the source of many migrant workers since around the time of World War II. On departure, these migrant workers received a grand send-off from relatives and villagers, who would tell them “Mokiti kuu yo––!” (Okinawan dialect for “Go and make some money!”) In the area around the apartment in New York where artist TERUYA Yuken formerly lived, immigrants from various countries had formed their own tight-knit communities. His work Earn lots of money. No need to write any letters, just send home the money first 2008 features a video in which handmade paper boats flying small national flags, floating in water pouring out of a street-side fire hydrant, evoke images of people who set out for a new land, the United States of America, in search of prosperity. With not only journeys to other nations but also minor movements between communities becoming more frequent, ever-accelerating global migration is even more complex and fluid today than it was when the work was first exhibited in the early years of this century.

Despite having their own abundant nature and complex cultures, many islands in the Asia-Pacific region have a history of forcible colonization by great powers and imperialist nations. WATSON Judy is a descendant of the indigenous Waanyi people of northern Australia and has been profoundly influenced by the history of her ancestors, who were displaced and had their culture destroyed. YEE I-Lann’s mother is from New Zealand and her father is Sino-Kadazan (part Chinese and part indigenous people of Sabah, Malaysia), and while delving into her own ethnic roots, she evokes the rich and diverse history of Southeast Asia for the viewer. Born and raised in Okinawa, TERUYA Yuken and URA Kyoko use traditional dyeing techniques dating back to the Ryukyu Kingdom era (1429-1879) to reflect on the future of Okinawa while drawing on their own Okinawan identity. 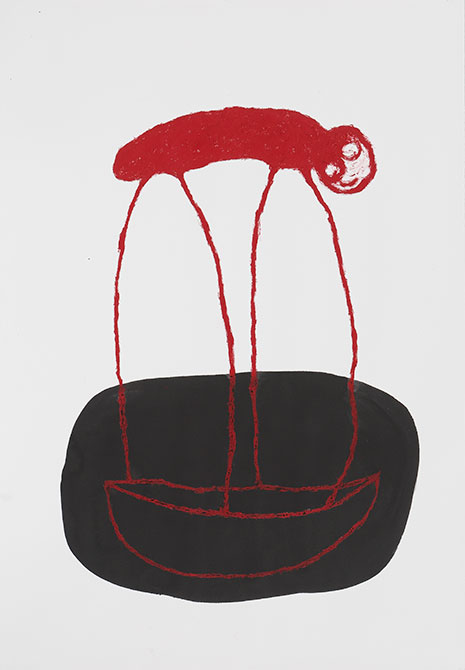 Zai Kuning,
Rocking the boat in the dead of the night, 2015
Collection of 21st Century Museum of Contemporary Art, Kanazawa
Photo: KIOKU Keizo

In light of his own seafaring lifestyle since childhood, Zai Kuning takes a strong interest in the past and present lives of seafaring peoples. History and narratives related to his own roots and routes (origins and destinations) are themes which he continues to explore, and in the context of present-day society in which migration has become the norm, these are indispensable points to address when discussing the process of modernization in Asia, as it overlaps significantly with issues relating to unique cultures and identities that are vanishing due to globalization. Singapore is known today as a highly urbanized nation, but its territory is made up of more than 60 islands, and languages spoken include Malay, Tamil, Chinese, Cantonese, and English, contributing to the maintenance of its cultural diversity as a place where various ethnic groups intermingle. However, its history has been neglected amid rapid modernization, and there seem to be few if any remnants of the past or collective memories, including of how the country was formed. ZAI shines a light into the shared darkness of humanity as well as on lost cultures and identities, and deals introspectively with universal human themes such as slaughter and death.

【Major Exhibit】Zai Kuning, Rocking the boat in the dead of the night, 2015 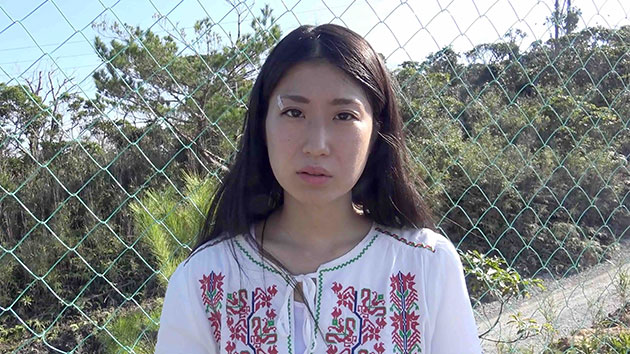 Underlying any examination of the issue of US bases in Okinawa, there are always relationships between related and unrelated parties and between perpetrators and non-perpetrators. In YANASE Anri’s video piece Kein Licht. (No Light) - From the place where I am standing now, YANASE herself recites from Kein Licht (No Light), a play written by Elfriede Jelinek (b. 1946 in Austria) in the wake of the 2011 Great East Japan Earthquake, tsunami and subsequent nuclear accident, while walking in front of the gate for a helipad construction site in Takae, Okinawa. To verify the identity of the “we” appearing in the text, Yanase superimposed relationships between related and unrelated parties, perpetrators and non-perpetrators, which were questioned after the 2011 earthquake, with the Okinawa base issue, and chose Takae as a place to grapple with realities that cannot be ignored. In Okinawa, where events are unfolding in real time, the text connects vividly to things occurring on the ground, extending the theme of the play set in Fukushima to Okinawa. YANASE’s work does not stop at the issues of Fukushima and Okinawa, but inquires into events happening everywhere in the world today. 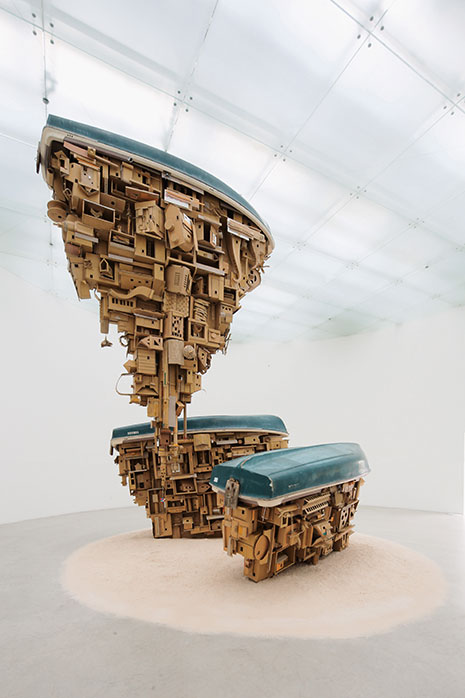 Alfredo & Isabel AQUILIZAN launched a project on the theme of “home” after they moved from their home city of Manila to Brisbane in 2006. Passage: Another Country symbolically represents the lives of people whose houses were submerged on the bottom of a dammed lake, reflecting present-day society’s prioritization of economic efficiency. Their work looks critically at how capitalism’s pursuit of growth, often framed as development and progress, has impacted cultures, customs, and values.
SAKATA Kiyoko was born in Niigata and moved to Okinawa to attend university. Her works, which combine various everyday materials, natural objects, and photographic images, take as their starting point the conflict she feels while traveling back and forth between Japan and Okinawa, as well as realities she experiences in day-to-day life. In her new work incorporating seashells and feathers of migratory birds, the artist reflects on the difficulty of entering a community from outside and the necessity of community for survival, informed by her own relocation to the island of Okinawa. 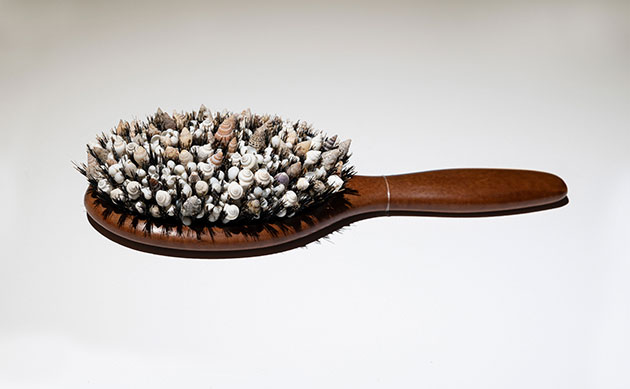 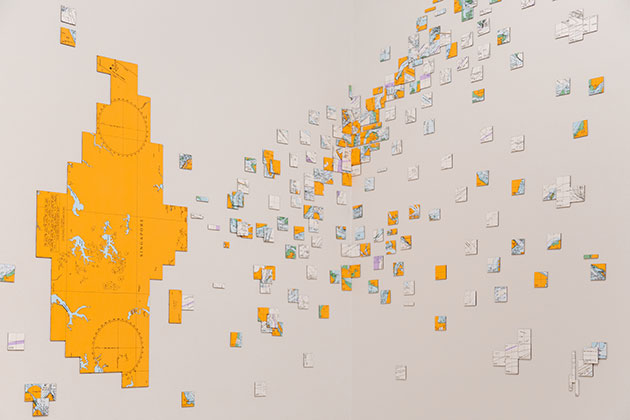 Insularity and the State

An athlete who has competed in sailing events including the Olympics, Charles LIM YI YONG has a wealth of knowledge and experience of the sea and marine environment. Based on these, in 2005 he began exhibiting works from the series SEA STATE, an examination of Singapore’s society, political situation, biosphere, and environment from multiple perspectives through the lens of the sea. Singapore is a country at the southern tip of the Malay Peninsula consisting of the island of Singapore and more than 60 smaller islands, and since its founding in 1965 it has expanded its land area by more than 50 square miles. Small islands have become an object of the city-state’s reclamation projects, and much has been sacrificed for Singapore’s increasing wealth and might, including its unique natural environment, culture, and history. LIM poignantly critiques these realities of his homeland in sophisticated video works and installations.

【Major Exhibit】
Charles LIM YI YONG
SEASTATE 8: the grid, whatever wherever whenever, 2014-2021

Grants from：
Agency for Cultural Affairs’ “ARTS for the Future! 2” Program