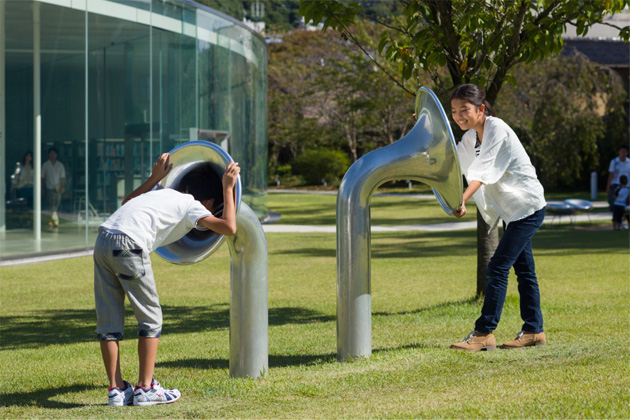 Twelve pipes that bell out like tubas are installed in the lawn surrounding the Museum. Each pipe passes underground and connects to another pipe, and each pair of pipes performs as a speaking tube. The bells of the paired pipes do not necessarily stand near one another, however, and hence, the speaker’s voice will be sent somewhere unexpected, and an entirely unexpected voice will be heard. While simple in structure, this contrivance produces a landscape where sound seems to travel through a labyrinth. The word “klangfeld” of the German title means “sound field.” The work is an expression of artist Florian Claar’s fascination with producing artworks that explore the possibilities of sound—a fascination propelling him since his early career.

Florian CLAAR
Born in Stuttgart, (West) Germany in 1968. Lives in Fujisawa, Kanagawa, Japan. Since moving to Japan in the mid- 1990s, Florian Claar has produced three-dimensional artworks that employ sound and artworks based on the digital analysis of sound waves. He has also undertaken numerous sculptural works for public spaces. Claar, who says, “I want to create characters that inter-blend architecture, machines, and life forms,” creates works that call our attention to the geometric structures abounding in our everyday world.