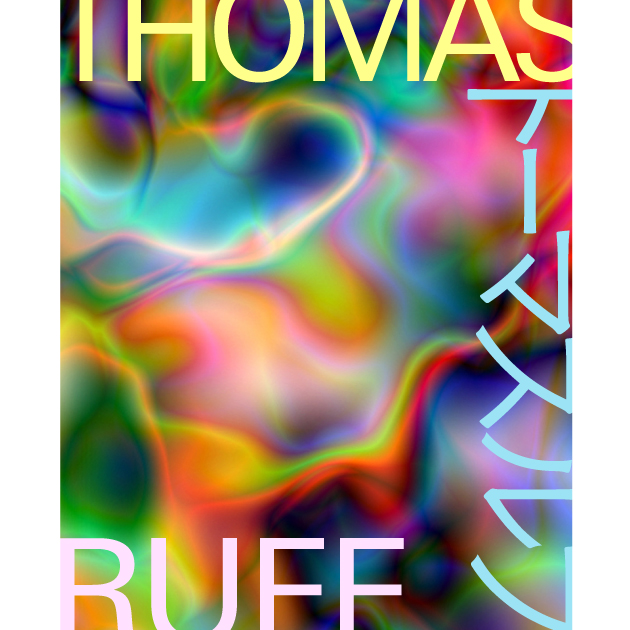 Thomas Ruff (born in 1958 in Zell am Harmersbach, Germany) has been a leading figure in contemporary photography since the 1990s when he emerged as part of the Becher School. Along with Andreas Gursky and Thomas Struth, Ruff studied photography with Bernd and Hilla Becher at the Kunstakademie Düsseldorf.
The exhibition introduces a wide range of works by this world-renowned photographer, stretching from his earliest efforts to his most recent and never-before-shown photographs. Ruff was first acclaimed for a series of huge two-meter-high portraits. Since then, he has explored a variety of themes, including architecture, urban landscapes, nudes, and celestial bodies. Through these subjects, he has developed a unique vision of the world we live in.
The medium of photography, closely entwined with our vision and perception, is another important theme in Ruff’s work. He searches for new possibilities in photographic expression using a multitude of images as his materials. These not only include Ruff’s own pictures but everything from digital images from the Internet to old photographs he has collected.
This exhibition consists of a total of 18 series, approximately 160 works, including Ruff’s first effort Interieurs; Porträts, which earned him widespread acclaim; cassini and ma.r.s., inspired by his boyhood interest in outer space; and nude and jpeg, which examine visual and information spaces in the age of the Internet, and his most recent photographs, press ++. 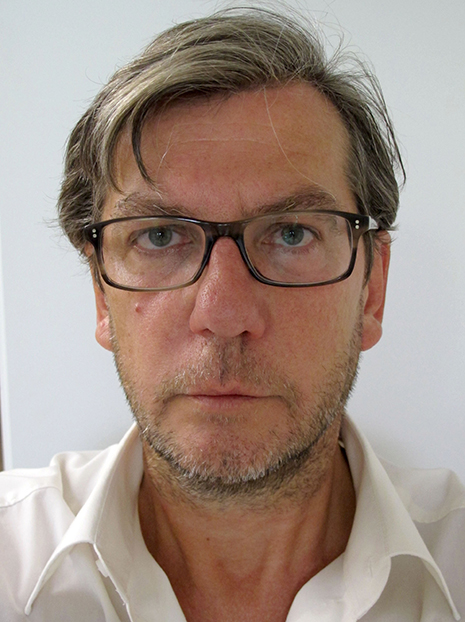 Born in 1958 in Zell am Harmersbach, Germany.
From 1977 to 1985, Ruff studied photography with Bernd and Hilla Becher at the Kunstakademie Düsseldorf. After first making the Interieurs series, which focused on typical interior scenes in German houses, Ruff received a great deal of acclaim for Porträts, a series of portraits of the artist’s friends that he enlarged to a huge size. He subsequently produced works with a variety of themes, including architecture, urban landscapes, nudes, and celestial bodies, and developed series based on specific concepts.
Since the 1990s, Ruff has been using digital processing in his work, as seen in series such as nudes and jpeg, which consist of manipulated versions of widely circulated images from the Internet. Other series include cassini and ma.r.s., which are made up of digitally processed photographs of astral bodies such as Mars that were taken with a space probe. In these series, Ruff sets out to restructure images using materials that were shot by other people. By consistently identifying the elements of information and expression that are a unique aspect of the photographic medium, Ruff has continually upended our preconceived notions about photography. Ruff has also worked as an educator, accepting a teaching post at the Kunstakademie Düsseldorf in 2000 and remained at the school until 2006.
Having held exhibitions throughout the world, Ruff is now one of the preeminent contemporary German photographers. In addition to participating in international exhibitions such as documenta 9 (1992) and the Venice Biennale (1995), he staged a retrospective of his work that traveled around Europe from 2001 to 2004, and a large-scale solo show at the Haus der Kunst (Munich) in 2012. 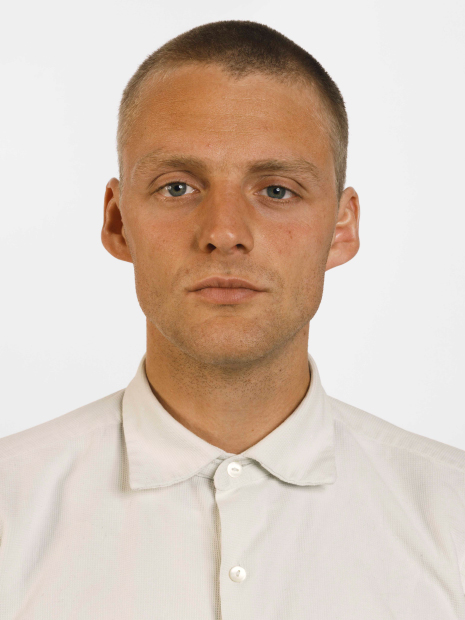 At first glance, these portraits have the appearance of regular ID photographs. But when we stand in front of the works, enlarged to a massive degree (210 x 165cm), they create a completely different impression. The fact that ordinary portrait photographs take on such a puzzling, mysterious quality suggests that the photographic medium is equipped with a unique mechanism. These early works, which helped establish Ruff’s name, use a simple approach to raise a variety of questions. The series was also a forerunner in the use of the large color print, which went on to be a standard format in contemporary photography. 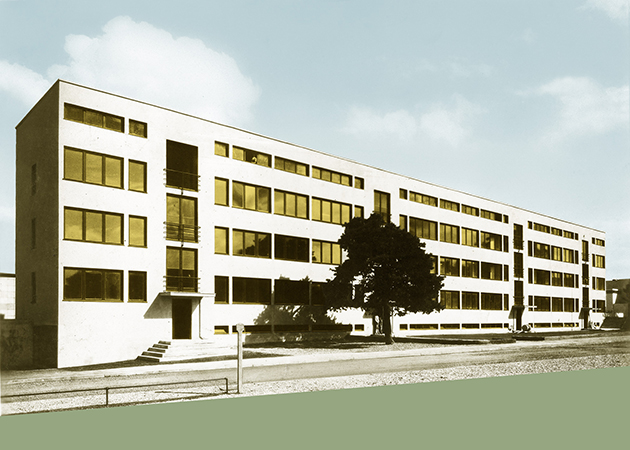 This series’ title is made up of the initials of the German architect Ludwig Mies van der Rohe, a leading proponent of modernist architecture. After first being commissioned by a museum to take pictures of Mies’ works, Ruff undertook a project to photograph all of the architect’s works from a specific period. In the process, he thoroughly researched past photographs of the buildings, and took his own pictures of the works or obtained existing photographs. Then, by digitally processing these images, Ruff embarked on a visual exploration of this master of modern architecture. 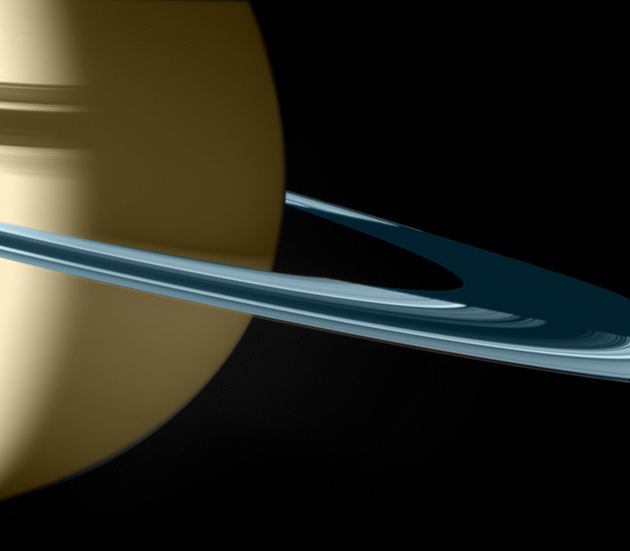 Ruff has maintained a keen interest in outer space since his childhood. His 2008 series cassini makes use of pictures of Saturn and its satellites that were taken by the Cassini space probe, launched by NASA in 1997. These images of celestial bodies, with alternatively abstract and geometrical designs, were created by manipulating the colors and tones of pictures from the Internet. 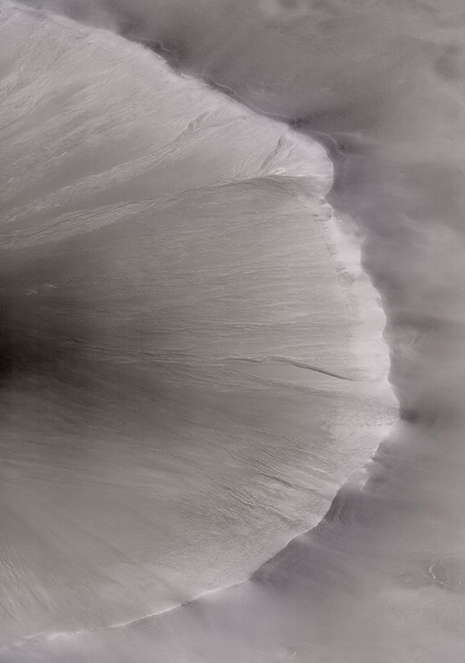 ma.r.s. also makes use of images that were taken by a NASA space probe. The probe’s camera, which began orbiting Mars in 2006, continues to send a wide range of information about the planet’s surface back to Earth. By digitally processing the angles and colors of the image data, Ruff explored the potential of landscape photography through a lens that was trained on the distant Red Planet. (Note: Among the works from ma.r.s. presented in this exhibition will be some 3D photographs.) 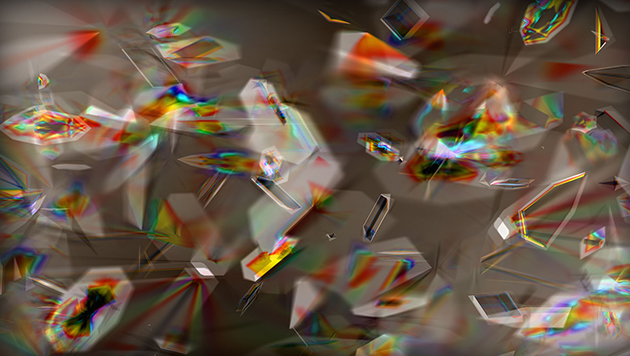 The word “photogram,” the title of this series, refers to a photographic technique developed by Moholy-Nagy László and others in the late 1920s. Without using a camera, the technique involves placing objects on photosensitive paper and capturing the shadows and light as concrete forms. Ruff began using the approach in his work in 2012. Traditional photograms could not be retouched and were limited to monochromatic expressions, but Ruff introduced the element of digital processing, which had long been a part of his practice. In a virtual darkroom inside the computer, he positions and colors objects, creating works by freely manipulating images. 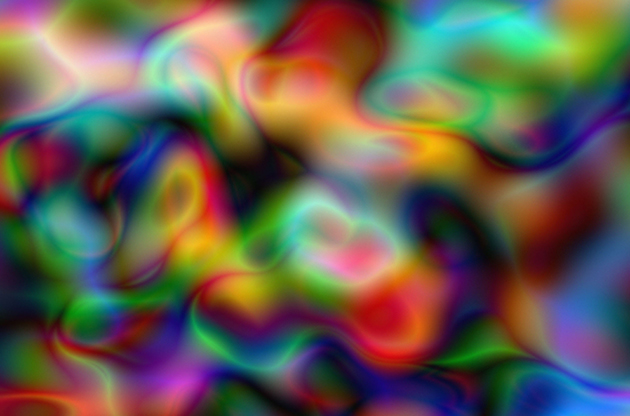 Are the millions of Internet images, so numerous as to be uncountable, reflective of reality? Or are they simply visual stimulants produced by combining RGB colors? Ruff began making the nudes series with anonymous pornographic pictures that are ubiquitous on the Internet and then began deconstructing the images. By digitally manipulating them to the point where it is impossible to identify the original forms in the pictures (derived from Japanese manga and anime), Ruff strips the pictures of meaning and information.

Along with nudes and Substrate, jpeg focuses on the deconstruction of digital images, but the structure of the images is another element in this series. The title refers to a method compressing for digital images – at present, it is the most common format of this kind in the world. Making use of the format’s special characteristics (compressing an image too much causes block noise, etc.), Ruff gives visual a form to the structure of the images. 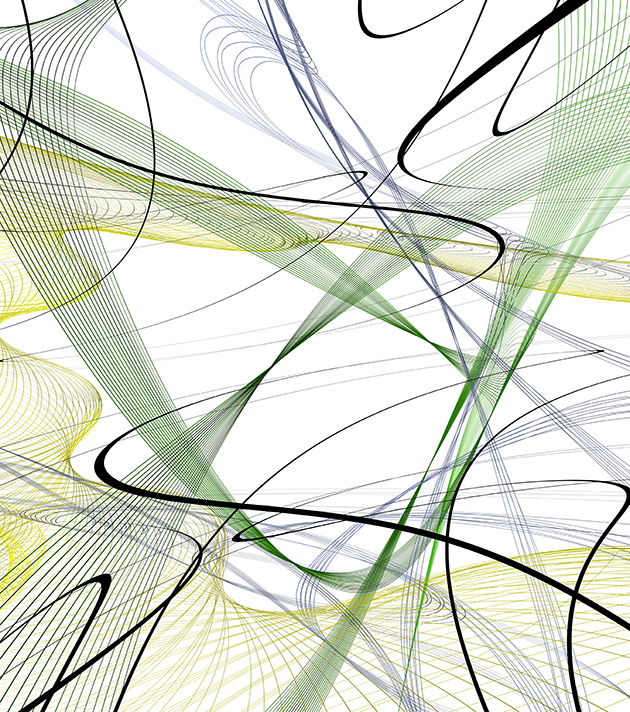 This series, which Ruff began in 2008, is based on the artist’s interest in mathematics and physics. Inspired by diagrams (engravings) of magnetic fields in the British physicist James Clerk Maxwell’s (1831-1879) study of electromagnetism, Ruff reproduced linear forms based on various mathematical formulas using a 3D computer program and restructured them in a digital space. Then he converted them into two-dimensional works, giving the complex combinations of curved lines the appearance of planetary orbits or abstract drawings.