Satoshi Murakami (b. 1988) graduated with a degree in architecture from the Musashino Art University in March 2011, the same month as the devastating earthquake and tsunami hit the Tohoku region. The disaster prompted the artist to launch a project titled “Living Migration,” in which he walks around carrying on his back a house he made from styrofoam, changing location continuously. This he has done both in Japan and overseas.
The project was sparked by questions Murakami had surrounding the loss of so many people’s homes to the quake and tsunami, the decline of communities after the disaster, and the fact that despite contracting to rent a house just prior to the quake, he and a group of friends were not immediately able to move in. Exploring an everyday existence in which we live to accumulate more money and possessions than we need, and the social conditions and reasons that differentiate public and private spaces, this project considers how the lifestyles of individuals impact on wider society.
Joining Living Migration 2015.5–2018.9 acquired by the Museum in 2019, the exhibition will be the first-ever survey of Murakami’s “Living Migration” project in its entirety, from its launch on April 5, 2014 to the present day. The exhibition space, composed of diaries, drawings and photos detailing the people, landscapes and events Murakami met with while traveling with his portable dwelling, and a map showing the route taken by him, gives a sense of actually living the migration alongside the artist, and being right among his thoughts and dilemmas. During the exhibition, the latest work in Murakami’s “Advertising Sign House” project, based on the “Living Migration” project, will be installed in the Museum’s garden.
We anticipate that these works employing unique methods to convey the doubt and unease the artist has sensed in society, and offering a place for discussion, will encourage us to confront what it means to live in Japanese society since the Tohoku quake, reawakening our own powers of thought around many related issues. 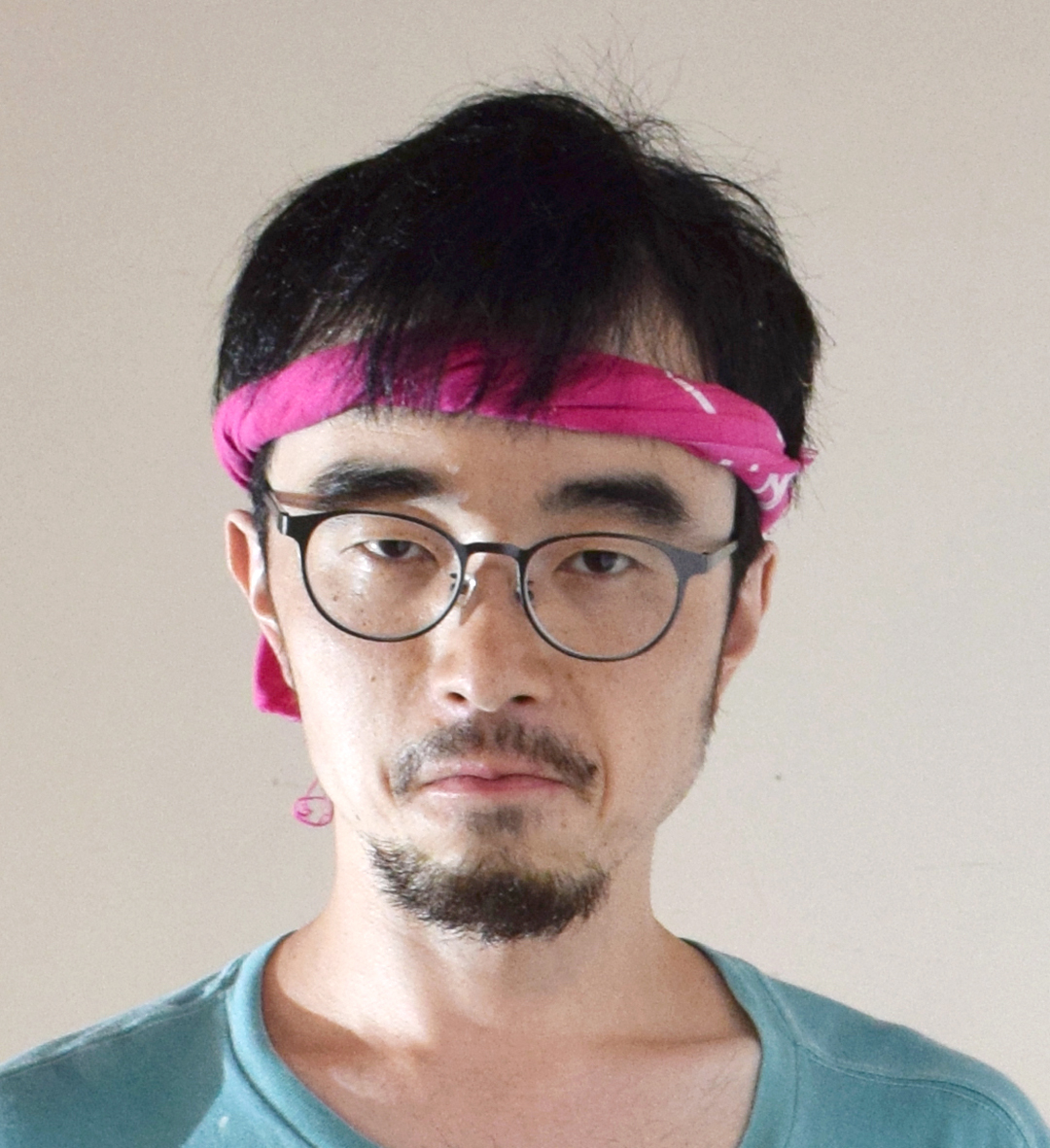 Born 1988 in Tokyo, where he is currently based. Graduated from Musashino Art University, Department of Architecture, in 2011. Focusing on the relationship between public and private, his art practice contemplates the ways in which the lifestyles of individuals impact on wider society. Recent years have seen him participate in number of exhibitions at art festivals and museums around Japan and abroad, including Culture City of East Asia 2018 Kanazawa: “Altering Home” (Ishikawa) and Takamatsu Contemporary Art Annual vol. 08: “Dissect the Society” (Takamatsu Art Museum, Kagawa).

When the Tohoku quake struck in March of the year of my graduation, I was with some friends taking possession of the keys for a workspace we had rented in the Hashiba district of Tokyo's Taito Ward. A massive tremor shook the building across the street like jelly, while in the distance, a giant hook dangling from a crane at the site of the Tokyo Skytree, then under construction, began to swing through the air. I remember thinking how dangerously close it seemed to hitting the main body of the Skytree. That night I fled by bicycle to my parents' home in Katsushika Ward, startled to witness as I pedaled water flowing the wrong way up the Sumida River, and hordes of pedestrians crossing the bridge like a migrant caravan. There at home, in the living room with its clean and tidy flooring, my father watched news of the tsunami and nuclear accident. For the next two years I made works at the studio in Hashiba, and organized little art festivals with friends and associates. Life consisted of making art, working part-time, paying the rent. I went about daily life, in order to go about daily life. Only natural I suppose. But at the same time I felt that really, I should be thinking more about the unimagined fragility of the foundations of society on which I stood. And began to wonder if just carrying on as I was, paying rent to live somewhere, as people did, would be sufficient to ensure my survival. It struck me there was something vaguely fraudulent about having such a quotidian existence: in a house with electricity, water and gas, as I produced art. So I embarked on a new initiative, which would start with making my own “way of living.” I began by drawing houses around the neighborhood. Snatching time between work and the other stuff of everyday life, I walked around the area, studiously sketching any houses, flats or condominiums that caught my eye, in black pen on white paper. After completing a few dozen of these drawings, I drew a small dwelling for myself. Then I went to a DIY store, purchased some styrofoam panels, and built the tiniest house I could that would still have room for me to sleep, just as I had drawn it. Making the walls and roof from wood and styrofoam, for extra strength I covered it with white packing tape, then painted over the tape in white to smooth it. To finish, I drew on black outlines of the kind I'd been using in all those drawings of houses. In April 2014, I assigned my life the title “Living Migration,” leaving the rental in Takamatsu I had been in for less than six months, to take up residence in my styrofoam house, which I carry around on my shoulder, living a migratory life.

Works in
the exhibition
[Gallery 13] 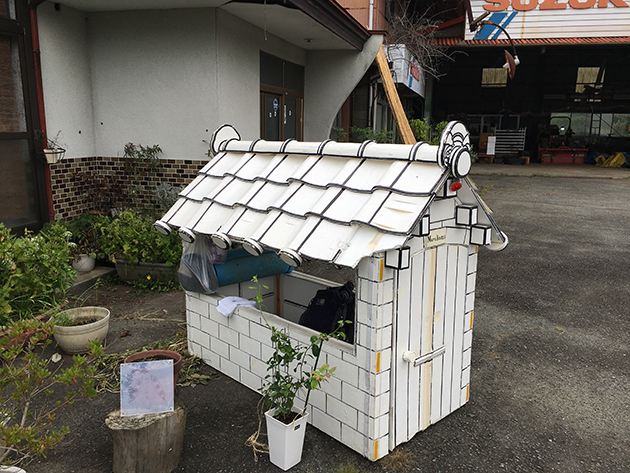 September 21, 2017
The driveway of a farmhouse in Asomura, Kumamoto
photo: MURAKAMI Satoshi

Murakami has already built three houses since launching his “Living Migration” project. The first was used to move around Japan for a year or so from April 2014. Murakami used the second house from May 2015 to September 2018, not only in Japan but also across the sea in Korea, before it reached Kanazawa, where the house was acquired for the Museum’s collection. Having thus forfeited his home, Murakami built a third, which he is currently carrying around. The exhibition brings together all three of these dwellings. 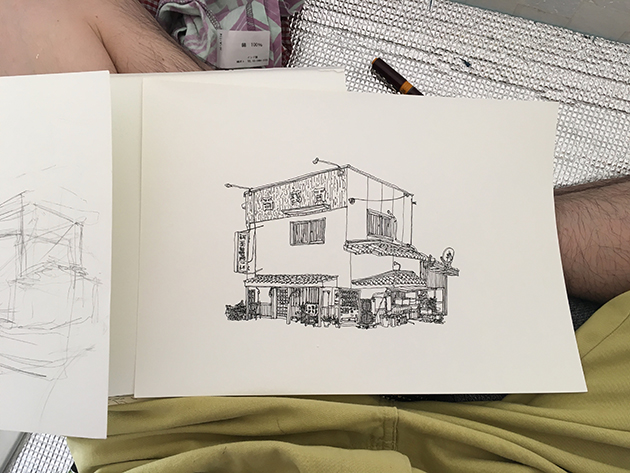 Drawings of houses and other buildings made by Murakami during his migrations. Murakami draws the “houses with addresses” lived in by people in each location he visits, to help him maintain, via his own migratory lifestyle, an objective view of the usual, so-called settled way of living itself.

Diaries penned alongside the drawings during the artist’s life on the road. Entries from several years’ worth of carrying his styrofoam house around, meeting people and pondering things in different locations, are displayed with drawings from the same days. 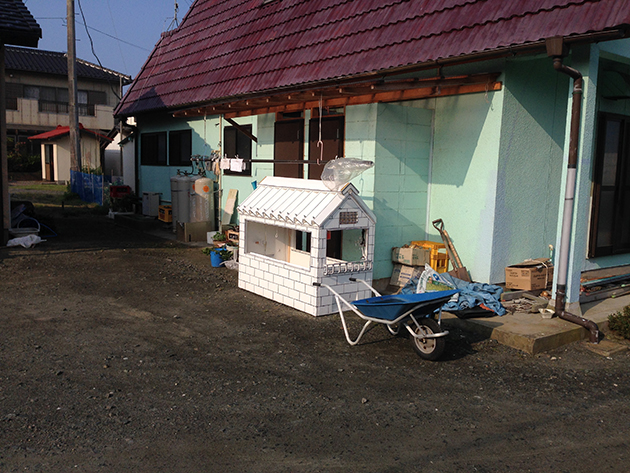 June 24, 2015
Under the eaves of the Yamana guesthouse in Nakosomachi,
Iwaki, Fukushima
photo: MURAKAMI Satoshi

To sleep on the ground requires a plot of ground. Without it, one may be accused of illegal occupation, a criminal offense, by the “landowner,” so it is necessary to rent a site. Negotiating to rent sites in temple and shrine precincts, the yards of private homes, shopping center carparks, art museums, and under the eaves of shops, Murakami is able to sleep there and thus live in his styrofoam house. The photos of sites here show the artist’s house on land rented in this manner. 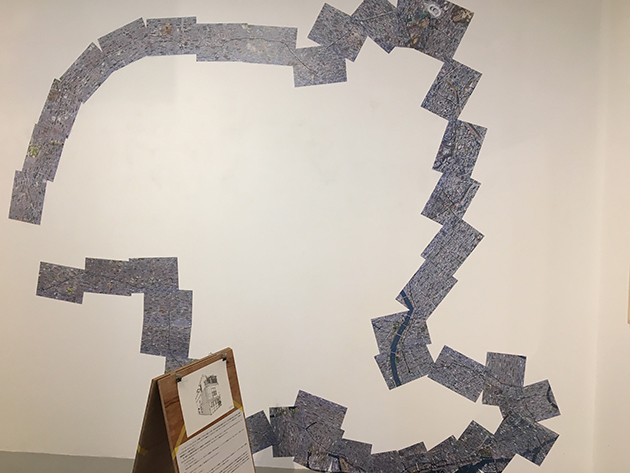 The route taken by Murakami is traced using Google Earth, printed and joined together. The landscapes and seasonal changes shown on Google Earth are close to what Murakami actually experienced during his travels. Tracing this walking route will give viewers a partial glimpse into Murakami’s migratory existence. 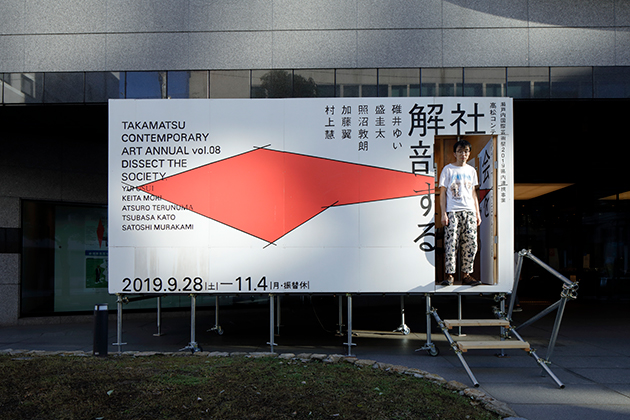 “Advertising Sign House” has its origins in the “Living Migration” project. The idea stems from Murakami being asked how he makes a living amid his migrations, and from his unease with the movement of money in the form of advertising revenue embedded in the everyday. The exterior serves as a billboard for the exhibition, while inside Murakami has made a private space where he passes the time reading, writing and resting, thus including the structures of revenue and consumption in a single work. The sign is installed in the yard of the Museum, with Murakami spending occasional time in this “Advertising Sign House.”

During October and early November Murakami will stay in Kanazawa and run talks and workshops. From mid November to mid December he will undertake a “Living Migration” from Kanazawa to the Noto Peninsula.
From December to March he will stay at Kanaiwa Residence and run workshops and talk events. 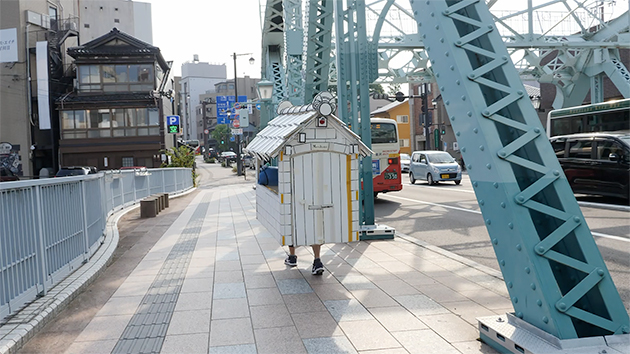 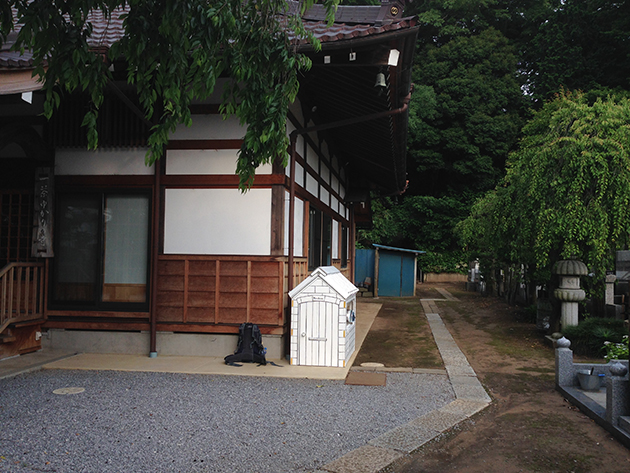 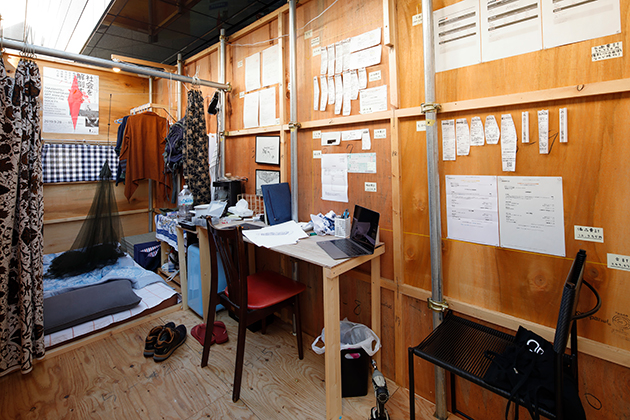 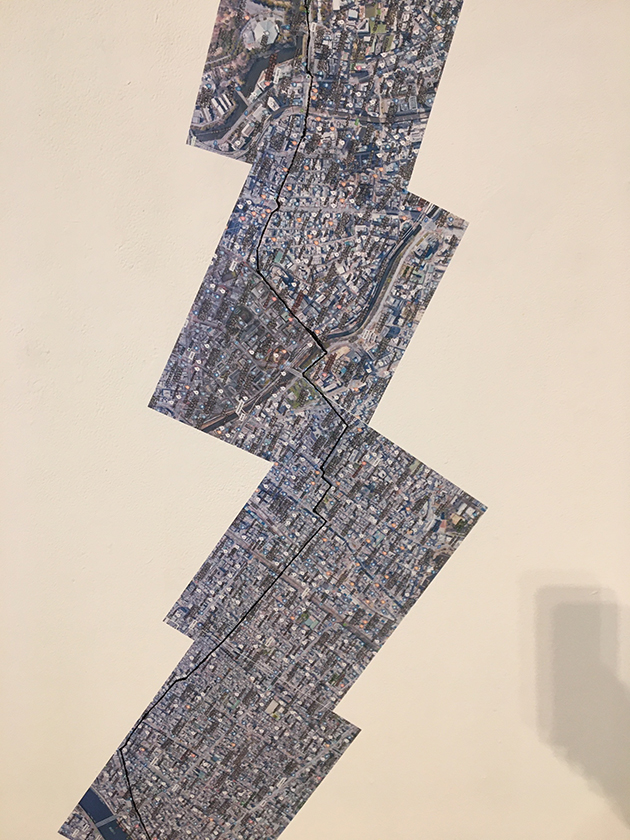